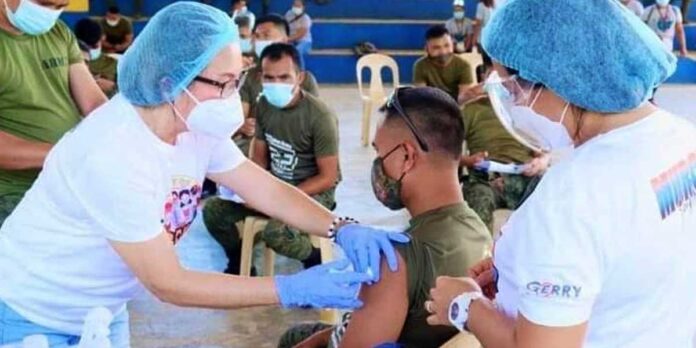 Bacolod City – The provincial government of Negros Occidental is targeting about 93,000 Negrenses to be vaccinated during the nationwide simultaneous vaccination drive against COVID-19 from November 29 to December 1 this year.

The most ideal target for every 31 local government units of Negros Occidental, is 1,000 persons to be vaccinated, which is equivalent to 31,000 individuals, in just one day, Governor Eugenio Jose Lacson said.

After three days, 93,000 Negrenses will be vaccinated, which Lacson said, will hopefully be attained as he stressed that the province has enough vaccines.

He, however, admitted that it is difficult to achieve the target set by the Department of Health to vaccinate half-a-million Negrenses during the three-day vaccination drive,

As of November 21, the provincial government of Negros Occidental reported that 30 percent of the 1.8 million Negrenses have already been vaccinated, which is equivalent to 548,010 persons.

Acting presidential spokesman Karlo Nograles clarified that November 29 and December 1 are considered “special working days” while only November 30 is a regular holiday for the commemoration of national hero Andres Bonifacio’s birth anniversary.

Nograles said that President Rodrigo Duterte has directed all government agencies and instrumentalities to extend all possible support to the “Bayanihan Bakunahan” program spearheaded by the Department of Health and the Department of Interior and Local Government.

On the other hand, Lacson said he also noted a marked increase of vaccinated individuals in Negros Occidental, which was recorded at 29,000 two weeks ago to 66,000 this week.

During a zoom meeting with Negros Occidental mayors, Lacson said he told them not to wait for the nationwide simultaneous vaccination drive to further intensify their efforts “but do it now.”