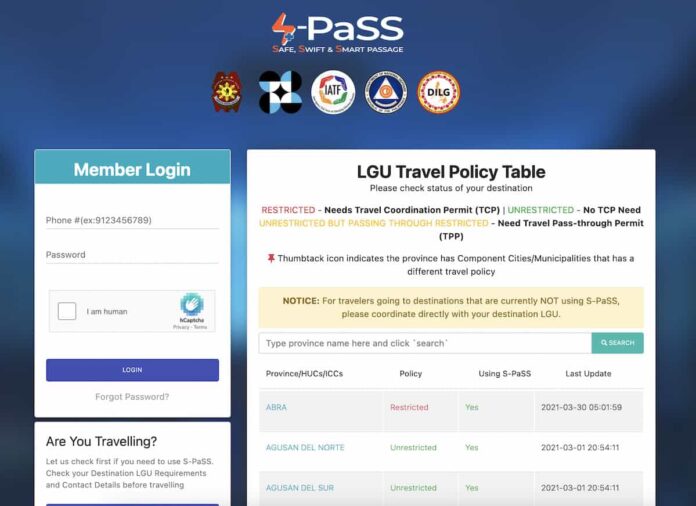 Bacolod City – Negros Occidental Gov. Eugenio Jose Lacson appears to be not backing down in requiring inbound travelers, even Bacolod City residents passing through the Silay-Bacolod Airport, to have S-Pass registration.

Meanwhile, S-PaSS is no longer required for all fully-vaccinated Bacolod City-bound travelers, except for their vaccination cards, according to Executive Director Em Legaspi-Ang of the Emergency Operations Center-Task Force, who spoke on behalf of Mayor Evelio Leonardia.

Ang maintained the non-requirement of the S-PaSS is legal, based on the executive order number 53 issued by Mayor Leonardia, which was in conformity and compliance with the Guidelines on the Implementation of Alert Levels System for COVID-19 Response in Pilot Areas as of October 13 issued by the National Inter Agency Task Force.

Lacson said that even airline companies are appreciative of the S-PaSS requirements because they no longer have to validate or authenticate the presented vaccination cards, or negative RT-PCR test results.

With Negros Occidental and Bacolod City now under Alert Level 2, he added that the provincial government has allowed an increase of flights, from six flights in previous weeks to the current 21 flights a week.

The issue is, if we want more people to come in because of the Christmas season, the province has done that, he stressed.

Confusion among inbound travelers ensued after the Bacolod City government and provincial government of Negros Occidental are on conflicting sides on the issue of S-PaSS requirements.

Lacson said that the province is willing to accept S-PaSS applications of Bacolod City residents.

Ang said that she will seek an intervention of the Department of Interior and Local Government on the executive orders to be followed by the airline companies.

She also said that the use of vaccination card instead of S-PaSS, is part of the incentives given to fully vaccinated passengers.

The Bacolod-Silay Airport is located in Silay City, which is among the component cities of Negros Occidental.

Lacson also welcomed a ruling to be issued by DILG on the issue.

Asked on when the province will lift the S-PaSS requirements, Lacson said “I can’t tell…maybe when the pandemic is gone, we can do that.”

Provincial Inter Agency Task Force action officer maintained that the executive order issued by Gov. Lacson harmonized with the guidelines issued by NIATF, which did not lift the use of S-PaSS, as the alert level being issued is only temporary. (Gilbert Bayoran via The Visayan Daily Star (TVDS), photo courtesy of TVDS)