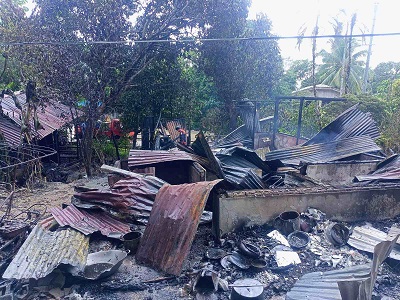 Two houses, a store and 2 motor vehicles were razed to the ground when fire broke out in Barangay Mangusu, 77 kilometers east of the city, around 11:15pm Friday, January 13.

No one was injured during the incident but fire probers estimated the damage to property at P550,000.

The Vitali Fire Sub-station report said 2 houses, a store, a motorcycle and a tricycle were among those razed to the ground.

Mangusu BION Alwin Tero said 3 families were displaced and are now staying with relatives near the barangay hall. The barangay council provided initial assistance to the families.