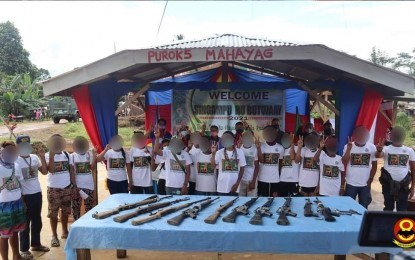 Davao City – The Armed Forces of the Philippines’ (AFP) 10th Infantry Division (ID) on Wednesday said a total of 811 former rebels under its area of responsibility have so far received livelihood and employment assistance from the government after leaving the armed struggle.

Capt. Mark Anthony Tito, 10th ID public affairs chief, told the Philippine News Agency on Wednesday that more rebels are getting convinced to give up arms and return to the folds of the law after suffering in the rebel movement.

“When they surrender, the government offers them either livelihood or employment as a way for them to reintegrate into the society,” Tito said.

The Davao Region was declared by the national government in 2010 as a national priority area to be cleared from the influence of the communist terrorist group.

A study by the 10ID showed that a total of 1,691 Custodial Debriefing Reports (CDRs) of surrenderers have been collected from 2016 to 2020.

Of the 1,691 CDRs of surrenderers, 48 percent or approximately 811 of them received employment or livelihood from the government’s Enhanced Comprehensive Local Integration Program (E CLIP), the study added.

“There are even some who are offered to join the Philippine Army because they embody qualifications that we need in the force like our recent trainees who are education graduates,” Tito said.

He said some of the rebels who obtained college diplomas went through a deradicalization process and were later on assessed fit to get employed.

“Some of the surrenderers do not immediately receive an employment because there are existing charges against them, those should be settled first before they can be employed,” he added.