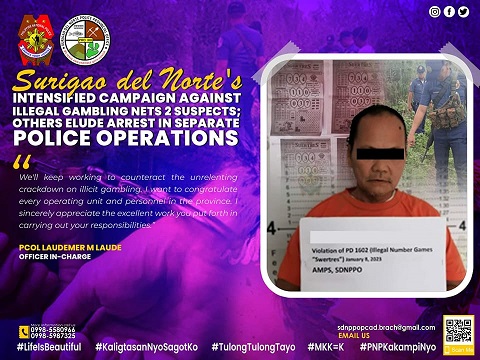 The stepped-up campaign against all forms of illegal gambling resulted in the successful arrest of two individuals. Three other violators were at large. However, authorities knew their identities yesterday in recent separate operations in the province.

Around 2:10 PM, another operation conducted by the personnel of the Alegria Municipal Police Station in Purok 2 in Barangay Julio Ouano, Alegria, Surigao del Norte, resulted in the arrest of Eddie Antrego Jubero, 59 years old, a resident of the said place. Confiscated were two bundles of stabs, five papers of illegal number tips, and Php 100.00 in bet money.

Meanwhile, in Brgy. Banban, Tagana-an town, authorities conducted an anti-illegal gambling operation (illegal cockfighting) after a concerned citizen reported the said illicit activity happening in progress in the area. Taganaan cops immediately responded, but the suspect and the other malefactors were able to elude arrest.

However, according to the operatives, the suspect was identified as Gregorio Logros Duhay Lungsod, 34, a resident of Brgy. Fabio, Tagana-an town, is still at large.

In addition, police agents from General Luna Municipal Police Station conducted an illegal gambling operation (Tari-Tari) after receiving a call from a concerned citizen. Immediately, the PNP personnel proceeded to the reported place. But police presence was sensed by all participants, who immediately ran in different directions to evade the arrest.

Nevertheless, the operating personnel identified by their respective names as Roland Ocat and Roel Espanto Platil, all residents of Brgy. Malinao in General Luna town, and they are being sought at large.

Evidence recovered in the area included one fighting cock, one gaff, and bet money worth Php 5,000.00.

“We’ll keep working to counteract the unrelenting crackdown on illicit gambling. I want to congratulate every operating unit and personnel in the province. I sincerely appreciate the excellent work you put forth in carrying out your responsibilities,” PD Laude said.