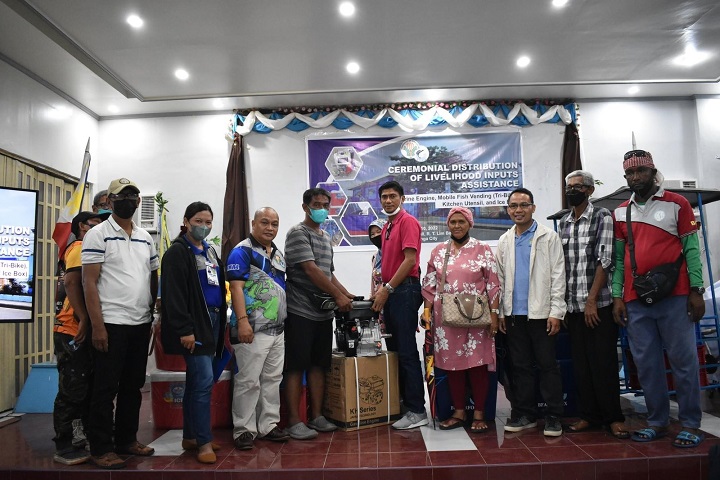 The activity was part of the Bureau’s commitment to support the marginalized fisherfolk by providing them livelihood input materials in this period of crisis (New Normal) and the aftermath of Typhoon PAENG that distraught primarily the livelihood of the coastal communities in Zamboanga City.

In his message, RD Kunting highlighted the importance of the provision of inputs/materials as it could be of great help to fisherfolk who were victims of the catastrophe brought upon by Typhoon PAENG.

Meanwhile, Mayor Dalipe, Mr. Jojo Dalipe, and Cong. Olaso expressed their gratitude to Da-BFAR IX for the initiative to ensure a sustainable livelihood for the fisherfolk.

The said activity of interventions which was a success through DA-BFAR IX as the lead agency with the help of the Fisheries Technicians of the City, distributed a total of 20 units of 13 Hp Marine Engine, 3 units of Mobile Fish Vending, 5 sets of Post-Harvest Processing Utensils, and 8 units of insulated fish/ice box for the fisherfolk recipients. Mrs. Joselyn Basilio, fisherfolk leader of Talon-Talon Fishermen and Gleaning Association and Mr. Bernardino Banaan, fisherfolk leader of Buenavista Farmers and Fisherfolk Association, expressed their great appreciation to DA-BFAR IX and City Officials for the provisions of livelihood assistance.