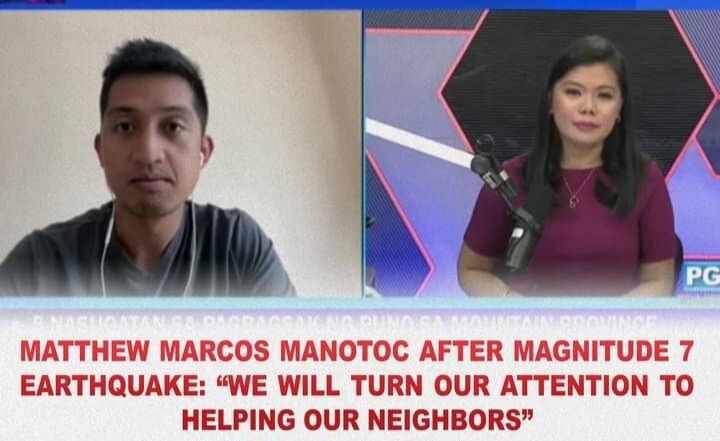 Ilocos Norte Governor Matthew J. Marcos Manotoc reported in two (2) separate interviews on July 28 that the province suffered only minor damage after Northern Luzon was struck by a powerful earthquake and said that he looks forward to helping the provinces of Abra, Benguet, and Ilocos Sur, which suffered catastrophic damage and recorded some casualties.

According to the reports of the Philippine Institute of Volcanology and Seismology, on July 27, at 8:43 a.m., Northern Luzon was jolted by a magnitude 7 quake which was centered in the Province of Abra. At least five (5) people have died and dozens have been injured. The earthquake also caused significant damage to many public structures and private properties.

Even while attending a seminar and training by the Department of Interior and Local Government in Metro Manila, the Governor, as the head of the Provincial Resiliency Council, has closely coordinated with concerned departments and agencies, reporting 18 damaged historical structures and school buildings, and seven (7) partially damaged houses. Affected residents were given immediate assistance by their local government units.

Meanwhile, the Provincial Resiliency Council and the Department of Public Works and Highways have successfully cleared blockages due to landslides that occurred along inter-provincial roads, particularly the Ilocos Norte-Abra and Ilocos Norte-Cagayan Roads, just a few hours after the quake.

“We will also turn our attention to helping our neighbors.” Our thoughts and prayers are with them,” he continued.

“First responders must be alert and basic supplies and necessities must be available.” And it is high time to check the structural integrity of buildings, especially historical buildings na alam natin more at risk.”

Work in the Provincial Government resumed yesterday after the result of an inspection by authorities on the safety and integrity of office buildings. (Edison Deus)