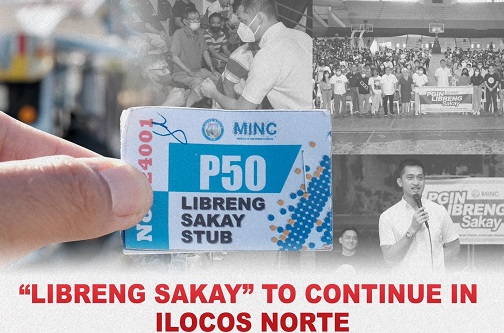 The Provincial Government of Ilocos Norte (PGIN) continues the “Libreng Sakay Program” this year as the the Metro Ilocos Norte Council (MINC) led the distribution of “free ride” stubs at the Ilocos Norte Centennial Arena on January 11.

A total of 780 recipients, composed of indigent students, senior citizens (SC), and persons with disabilities (PWDs) from the city of Laoag and the municipalities of San Nicolas, Bacarra, and Sarrat received 10 stubs, worth Php 500.

In 2020, Governor Matthew Marcos Manotoc started the “Libreng Sakay” program to provide free transport services to medical workers, bank employees, grocery store employees, and other front-liners during the height of the pandemic.

Afterward, in 2021, under the “Pantawid Pasada” program, all tricycle and jeepney drivers, including operators who are members of MINC, received gas vouchers to ferry residents of Ilocos Norte and utilized gasoline at participating gas stations in the province.

The Provincial Social Welfare and Development Office (PSWDO), headed by Mrs. Lilian Caliva Rin, selected the recipients with the aid of the social welfare offices from the said local government units.

Neil Villaruel, MMSU student, recipient from Laoag City who expressed his gratitude to the governor, saying:

“All I can say kadaytoy Libreng Sakay Program ni Governor is that, it really helps students especially those students who are struggling financially.

Especially right now na mahal yung mga bilihin and even gasolina, so basically mahal din yung fare. So, this is really a great platform for them to save their money and devote it to other expenses sa kanilang school.”

Furthermore, Gov. Marcos Manotoc emphasized that the program will be continued and strengthened, in collaboration with MINC and the Jeepney Operators and Drivers Association, in order to better serve those who are in need of transportation services. (Cita Macalipis)