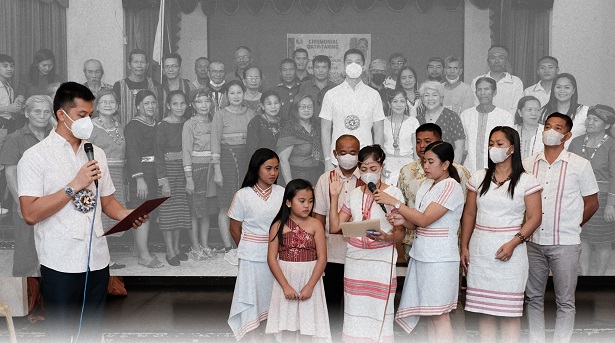 Governor Matthew Marcos Manotoc administered the oath of office to Hon. Cheryll B. Tabangay, a Tingguian from Nueva Era town and the first Indigenous People Mandatory Representative (IPMR) of Ilocos Norte, at the Provincial Capitol Auditorium on January 11.

“We must know that soon to be Bokal Cheryll will not only be the voice of Nueva Era and the voice of her tribe, but also the voice of all Indigenous People of Ilocos Norte. So, we ask that Ma’am Cheryll, keep that in mind as we move forward, we must listen to all of our Indigenous People and make sure that all their interest, their goals, and their needs are heard and accommodated sa SP,” Gov. Marcos Manotoc remarked.

Hon. Tabangay, expressing her gratitude to the IPs, said, “I will not make any promises, but I will do my best to serve and protect the rights and welfare of IPs.”

“And I ask for your support and cooperation so that we can uplift our tribes as Indigenous People of Ilocos Norte.”

Furthermore, Vice Governor Cecilia Araneta Marcos expressed her excitement and welcomed Hon. Tabangay, under her administration as presiding officer of the Provincial Board.

Hon. Tabangay will begin working in her office on Monday, January 16, and representing the entire IP communities in the province, across the towns of Adams, Pagudpud, Dumalneg, Bangui, Vintar, Marcos, Dingras, Carasi, Solsona, and Nueva Era. (Mariell Pahinag)