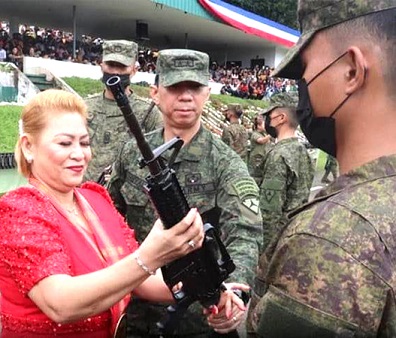 Of the 227 newly enlisted privates, 180 will join the infantry units, while 47 others are joining the Philippine Army engineering units.

There are five Army battalions stationed in Negros Island, supervised by 302nd and 303rd Infantry Brigades.

Arevalo reminded them to be watchful, remember their instructor’s and training models’ teachings, and continue learning and praying for their safety.

The neophyte soldiers are composed of 205 males and 21 females.,

“Bring with you our mantra, ‘Loved by the People, feared by the Enemy’ as your guide in performing your duty,” Arevalo also told them.

The Ceremonial Entrustment of Firearms to the new privates, which was officiated by Mambusao Mayor Luzviminda Labao, highlighted the activity.

The rite emphasizes to soldiers that firearms are tools to perform the mandates of the AFP and symbolize the protection of the rights of the Filipino people.

In her message, Mayor Labao told the new soldiers that they are the Army’s future who would protect the country and that serving the nation is a once-in-a-lifetime opportunity; hence, they must accept it with open hearts and minds.

“Stay focused, stay true, and remember that you are the ones who will ensure the safety and security of our country for future generations,” she said.

Private Kimberly Ambuan, a female graduate of Bachelor of Science in Business Administration from Panay, Capiz, bagged the 3ID Commander Award for besting 226 other candidate soldiers with a general average of 93.82 percent.

Another female soldier, Pvt. Melanie Quiaot, a graduate of Bachelor in Science in Elementary Education, bagged the Chief of Staff award, for graduating number two with an average of 93.51 percent. (Gilbert Bayoran via The Visayan Daily Star (TVDS), photo courtesy of TVDS)