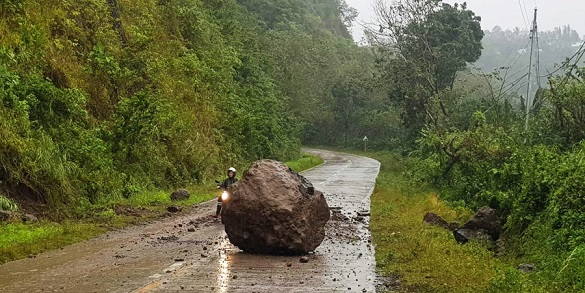 Bacolod City – The Provincial Social Welfare and Development Office (PSWDO) reported that 369 families in four Negros Occidental local government units have evacuated from their respective homes, amid the continued effects of a low pressure area (LPA) and shear line that triggered heavy rains across Negros island.

Provincial Social Welfare and Development Officer Merle Garcia disclosed that evacuations were carried out in 19 barangays of cities of Sagay, Cadiz and Bago, as well as Cauayan, affecting 1,236 persons.

A total of 258 families, composed of 872 individuals, are now staying in evacuation centers. They have received family food packs from their respective LGUs.

Landslides were reported in cities of San Carlos and Talisay, Negros Occidental, where a minor was injured and a house destroyed.

More than a dozen passengers, along with several rolling cargoes were stranded yesterday at the port of San Carlos City in Negros Occidental, after several Cebu-bound ferries suspended trips due to the weather. The suspension stranded a total of 24 Cebu-bound passengers and 12 rolling cargoes.

In San Carlos City, a portion of the ecotranslink highway which connects the city to the town of Don Salvador Benedicto was forced to close one lane of traffic following a rockslide in the area.

In a social media post made by the San Carlos City Disaster Risk Reduction Management Office, they are advising motorists traversing the Zone 12 upper portion of the highway to exercise caution due to the high risk of landslides taking place in the area.