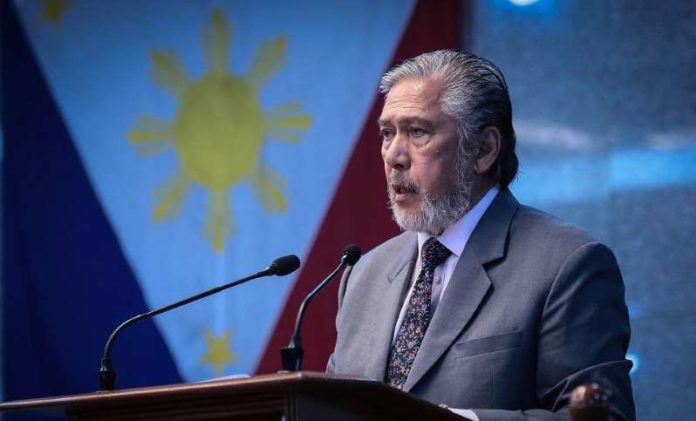 SENATE President Vicente Sotto III on Friday held out hopes President Duterte would recall his Executive Order 128 reducing pork tariffs, saying that without such voluntary recall, lawmakers would have no choice but adopt a resolution revoking it when they resume sessions on May 17.

At the close of the second Committee of the Whole (COW) hearings on food security last week, Sotto had counted at least 19 senators endorsing a resolution asking Duterte to voluntarily recall EO 128. If that fails, then Congress would have to assert its power to set tariff rates when they get back to work.

Sotto indicated that the senators’ determination to roll back the order, dubbed as a threat to the P300-billion local hog sector,  stemmed from two things: one, the glaring data gaps presented by government officials on the volumes of pork importations and on supply and demand of pork, at the ongoing COW hearings of the Senate; and two, the timing of the endorsement to Congress of the Palace proposal on the tariff cuts.

Some senators  saw apparent bad faith in the Executive’s endorsing to them the recommendation for tariff reductions only on March 26—the day they were to start a scheduled recess till May 17—even though discussions on lowering tariff and increasing minimum access volume for imported pork was already being discussed way back in January.

“May pinanggagalingan kung tutuusin ang background nito; ito yung isa sa bini-bring up namin kahapon [There is a background to this lengthy discusssion in the Senate; that was what we were raising in yesterday’s hearing],” Sotto said.

He added, partly in Filipino: “This power to lower tariffs or raise the MAV is a power of Congress which we are allowed by law to delegate to the President. That happens when it is of utmost necessity and Congress is not in session. But in this case, this was being discussed in January. They were ready to make proposals in February, but it was like we were being dribbled in the responses of [Agriculture] Secretary Dar when we asked when they would be ready. And then they give it to us on March 26, they will send us the letter of the President, asking us to do what they want us to do [reduce tariffs], on March 26. But on March 26, we adjourned, that was our last day. What does that mean?”

The Senate leader added senators could not be faulted for thinking there is more to it. “Isn’t that the logical thing that would come to mind for us?”

Sotto reminded everyone that what was sent to the Senate is a request to bring down the tariff and raise the minimum access volume on imported pork.

At the same time, the Senate President said senators were not ruling out the possibility the delayed Executive action on the tariff and MAV was intentional.

“That is our suspicion and we cannot intervene and ask why or what is the basis for that order?  So now we called a hearing which coincidentally was already covered by a resolution filed by Senator Lacson,”  he said, referring to Lacson’s earlier resolution used as basis for the COW hearings on food security, as triggered by the supposed pork supply and price crisis, on account of the African swine fever (ASF).

Sotto repeated the question raised by some senators who doubted that the ASF was really the trigger behind the stampede to jack up imports, considering that ASF had been raging through the country since 2018.

Sotto added: “We are also keen to know where the ASF came from.”

Meanwhile, he scoffed at the theory that the ASF was introduced into the country as a result of the Filipinos’ penchant for bringing pasalubong, including supposedly frozen food. This is in contrast to suspicion that ASF came because some corrupt officials allowed inbridled importation of pork even from ASF-affected countries.

“Pasalubong? Pinapakain ba sa baboy ang pasalubong [Food gifts? Do you feed food gifts to pigs?” Sotto asked mockingly, to stress his point that the excuse given was unacceptable to senators.