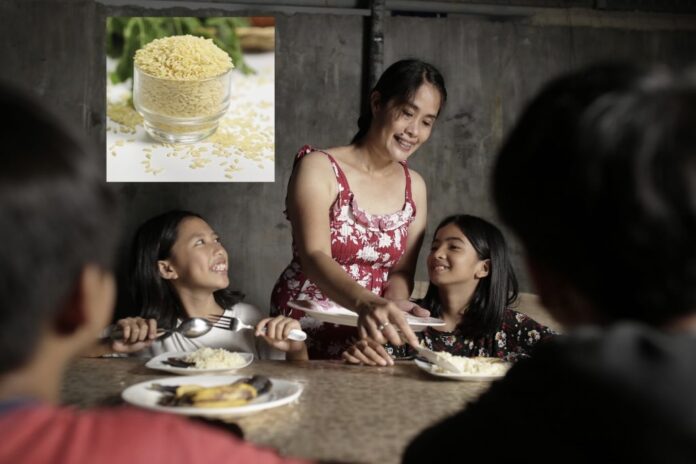 IN a landmark step for biosafety regulatory processes in the Philippines, the government approved Golden Rice for commercial planting, and the Bacillus thuringiensis (Bt) eggplant for direct use as food, feed, or for processing.

This means that Filipino rice farmers may soon be able to plant and consumers may soon have on their tables the Vitamin A-infused Golden Rice after the Bureau of Plant Industry of the Department of Agriculture (DA-BPI) issued a permit for commercial propagation of the biotech plant.

The Philippine’s biosafety approval of Golden Rice is the first authorization for commercial propagation of a genetically engineered rice in South and Southeast Asia.

The Bt eggplant, however, will still need need commercial propagation approval for environmental safety assessment before it can be made available to the public.

The DA-BPI issued on July 21 the Biosafety Permit for Commercial Propagation 21-012Propa to Philippine Rice Research Institute (PhilRice), which owns and has the license to Golden Rice.

The permit said PhilRice has “satisfactorily complied with all the requirements” for the issuance of the permit, signed by DA-BPI Director Dr.  George Y. Culaste. It was released to the media on July 23.

The biosafety permit said the Golden Rice has undergone “satisfactory biosafety assessment” pursuant to the Joint Department Circular (JDC) 1 Series of 2016 issued by the Departments of Science, Agriculture, Environment, Health, and Interior and Local Government.

Bt eggplant, locally called Bt talong, has been found to be as safe as a conventional eggplant, and can substitute for its traditional counterpart, according to the DA-BPI approval. The biosafety permit has been sent to the University of the Philippines Los Baños (UPLB), the ISAAA Knowledge Center said in a news release.

Bt eggplant contains a natural protein from the soil bacterium Bacillus thuringiensis which makes it resistant to eggplant fruit and shoot borer (EFSB), the most destructive pest of eggplants. The Bt protein affects EFSB worm only and is safe for humans, farm animals, and nontarget insects.

“Bt eggplant is safe as it only targets EFSB. It is safe for humans, animals, and non-target insects,” explained Dr. Lourdes D. Taylo, study leader of the Bt eggplant project from UPLB.

The Philippines joins Bangladesh as the only two countries that have certified the safety of Bt eggplant. Bangladesh was the first country to plant Bt eggplant in 2014.

Golden Rice is part of the Healthier Rice Project carried out by DA-PhilRice in partnership with the International Rice Research Institute (IRRI).

De Leon clarified that Golden Rice will still have to seek varietal registration with the National Seed Industry Council (NSIC), which approves the registration of varieties based on consistent good agronomic field performance.

“Rigorous research and regulatory review has demonstrated that Golden Rice is as safe as ordinary rice with the added benefit of beta-carotene in its grains” says IRRI Director for Research Dr. Ajay Kohli.

“This milestone approval is the product of cross-cutting collaborative work in the agriculture and nutrition sciences, the public sector, and local farming communities, who are all looking forward to seeing Golden Rice reach the tables of those who need it the most,” Kohli added.

De Leon said they will still have to complete the remaining few next steps, such as seed increase, to be able to bring the product to farmers and consumers at the soonest possible time.

He emphasized that Golden Rice is developed for humanitarian purposes to help curb vitamin A deficiency (VAD). He said that they aim to deploy the vitamin A-enriched rice in partnership with appropriate agencies through market-based and programmatic approaches (e.g., feeding program) in areas where the prevalence of vitamin A deficiency is high.

In an e-mail interview with the BusinessMirror, farmer Edwin Paraluman said, “Many farmers are eagerly awaiting the arrival of Golden Rice in the Philippines.”

“We are excited to start growing Golden Rice to provide more vitamin A,” especially with the current Covid-19 pandemic, when “it is more important than ever for our children to have healthy, nutritious diets,” said Paraluman, chairman of the Philippine Farmers Advisory Board.

He said the farmers have seen the benefits of GM corn, which has been available for the last 15 years, and they “understand the health benefits that Golden Rice can offer.”

When asked if the farmers and their families are willing to eat Golden Rice, he said for the poor families, Golden Rice “is an easier, more reliable way to improve their diets because rice is such a staple crop in our diets.”

He said GM corn, also known as Bt corn, has proven successful in the country, so the “acceptance for these kinds of new varieties is growing.”

He said farmers are prepared to plant Golden Rice because they have seen the benefits of GM crops with increased yield and income for farmers.

“Thanks to GM corn, our yields increased significantly with no adverse effects over 15 years, and we anticipate the same success from Golden Rice,” he said.

In an e-mail interview, the BusinessMirror asked Dr. Russell Reinke, Healthier Rice program lead at the CGIAR International Rice Research Institute (IRRI), why Golden Rice is still needed when people can be urged to eat vitamin A-rich food; or the government could just use the money by distributing vitamin A pills to the beneficiaries. Reinke said: “Vitamin A is found in fresh fruits and vegetables as well as meat, which also tend to be the more expensive foods, particularly in low-income countries like the Philippines.”

Reinke explained that while average incomes have improved in the Philippines, poverty levels remain high and even before the pandemic, the prevalence of VAD was only around 20 percent for children in low income groups.

“The Filipino diet is chronically inadequate in vitamin A. Almost half of young Filipino children and 70 percent of schoolchildren do not meet the estimated average requirements [EAR] for vitamin A,” he said.

He said rice remains an important staple food for the poorest, which makes it the “ideal vehicle” for additional nutrients, given that Filipinos eat almost 120 kg of rice per year.

He added that “as a complementary tool” Golden Rice provides up to 50 percent of the EAR of vitamin A. It can help provide additional nutrients into Filipino diets to support longer term efforts to reduce poverty and improve household nutrition.

Studies have shown that a one-cup portion of cooked Golden Rice contains enough beta-carotene to meet up to 30 percent to 50 percent of the estimated average requirement of vitamin A for children aged 6 months to 5 years, the group most at risk of vitamin A insufficiency in the Philippines.

At present, only 2 out of 10 Filipino households meet the EAR for vitamin A intake in their daily diet.

On the concern of possible adverse effect of prolonged eating of Golden Rice, Reinke said it is “a more nutritious food-based intervention.”

He added that the only modification made in Golden Rice is to ensure that the beta-carotene naturally produced in the plant is also present in the grain that is consumed.

“In all other aspects, Golden Rice is identical to traditional varieties,” Reinke said.

He said that the onlydifference for consumers isa “greater level of beta-carotene, which the body converts as needed into vitamin A.”

He said Golden Rice has been approved as safe to eat by regulatory agencies in Australia, Canada, New Zealand and the US following rigorous safety trials since 2014.

Reinke said it is safe for human consumption because the engineering of Golden Rice “did not alter the safety profile of conventional white rice, and regulatory assessments have declared that Golden Rice is as safe as ordinary rice.”

He explained that Golden Rice may not be available immediately but may take some time after the approval of Golden Rice for commercial propagation because the DA-PhilRice still needs to ramp up the volume of seed available for farmers which will be carried out over at least two planting seasons.

“We expect DA-PhilRice to be able to begin distributing the seed to target communities around this time next year,” he said, adding that the pandemic may restrict their activities.

He said the seed will be distributed to farmers in regions with high levels of VAD, and they can keep and re-plant the seed, although it is recommended that farmers source original, quality seed.

Regarding its price, Golden Rice is not expected to cost more than any other varieties of rice, and if that will be the case, it would “defeat the purpose if it could not be accessed by the very farmers and families who most need its additional nutrients,” Reinke said.

Won’t GR be just favorable to big planters and middlemen? Reinke said DA-PhilRice officials are currently identifying the provinces where VAD is a significant health issue to prioritise the deployment of Golden Rice.

“The new variety will not require any different cultivation methods, pest control methods, or be any more expensive to consumers or producers than existing varieties of rice. As such, Golden Rice will eventually be available for all producers to plant—not just big planters.

“Above all, Golden Rice will benefit those communities in the Philippines—and worldwide—who still face VAD and the negative health consequences it brings.”