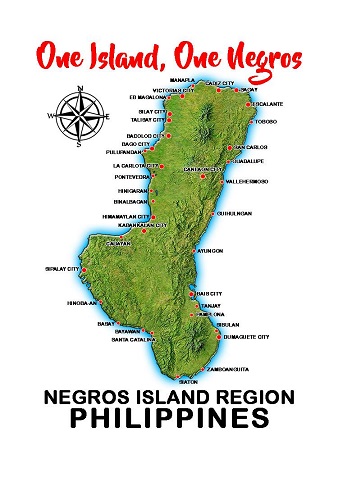 Bacolod City – The Technical Working Group of Negros Island Region will consult the three governors of Negros Occidental, Negros Oriental and Siquijor, the provinces which will compose the proposed Negros Island Region, to decide the “best way on how to divide agencies for the regional centers,” according to Negros Occidental 3rd District Rep. Jose Francisco Benitez.

Benitez, who authored the NIR bill that includes Siquijor, disclosed that the three governors will have to decide “what is the best way to divide agencies,” with the aim of fast tracking government services.

When the NIR was first established in 2015, transitional regional offices were similarly established in Dumaguete City, Negros Oriental and Bacolod City in Negros Occidental, with their budgets coming from the existing agencies. However, NIR was dissolved in 2017 by the President then, Rodrigo Duterte.

When the new NIR will be established, Benitez said the new regional centers will have an equivalent number of people, Benitez said, stressing also “It basically spreads out the per capita service of the central government across the three provinces.”

The House Committee on Local Government earlier approved a substitute bill that consolidates the bills of Benitez, and Negros Occidental Reps. Alfredo Marañon III and Juliet Ferrer, creating the NIR, which all include the island province of Siquijor.

Benitez said the inclusion of Siquijor in the proposed new region was requested by its governor, Jake Vincent Villa, and Lone Rep. Zaldy Villa, because of its proximity to Negros Island.

With its approval in the committee level, Benitez said they are now waiting an advisory from the Committee on Appropriations to start the budget deliberations of the proposed new region.

Benitez, however said that he does not expect any “major concerns” since the appropriation component in the legislative measure puts the budgetary requirement of agencies, who need to do it phases, within a span three years to four years, before NIR is fully implemented with the proper personnel needed.

“We recognize that this is a political desire of the constituents of Negros Occidental, Negros Oriental and Siquijor,” the 3rd district solon stressed.

Anticipating budgetary concerns, as the central government is undergoing a rightsizing process, Benitez said the legislators of the potential NIR are willing to ‘phase in’, as budget allows, over a longer period of time.

On the opposition of Negros Oriental Gov. Roel Degamo to the NIR, Benitez said “it will have its proper place.”

At the end of the day, the three representatives of Negros Oriental have remained firm, that they want NIR, which has been a request of their constituents, he added.

It remains to be seen what Gov. Degamo would want, Benitez said.

He added that the bill of Rep. Juliet Marie Ferrer (4th district, Negros Occ.) gives the governor of Negros Oriental the voice, to work out the details, to fit whatever Gov. Degamo feels is best for his constituents.

Benitez said he feels that the consolidated measure is “phrased” to ensure that whatever emerges will benefit everyone.

Benitez also expressed support to the plan of Negros Occidental Gov. Eugenio Jose Lacson to reach out, and visit Degamo to convince him to support the NIR. (Gilbert Bayoran via The Visayan Daily Star (TVDS), photo courtesy of TVDS)