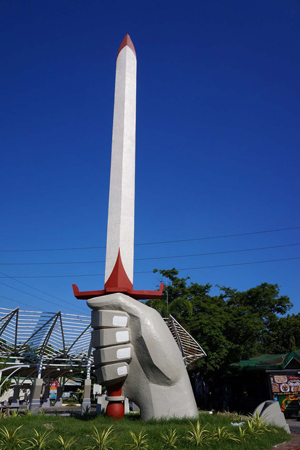 The Lenten tradition of Visita Iglesia, a religious pilgrimage to pray and reflect on the sufferings of the Lord Jesus Christ, remains an observed tradition in the province of Bataan. And since this year’s Holy Week is also just a few days before Araw ng Kagitingan (April 9), also known as Bataan Day, a visit to this province at this time is like hitting two birds with one stone—a religious as well as an historical pilgrimage.

Normally, travelers to Bataan take the Roman Superhighway (Bataan Provincial Expressway) to avoid the traffic gridlock in towns along the MacArthur Highway but you should travel via the latter to visit the province’s seven-old Spanish-era churches which are all along the MacArthur Highway, within six towns and one city on the province’s eastern coast.

Passing along the National Road on your way to visit Bataan’s pilgrim churches, you’ll also pass a lot of the 97 interesting Death March Markers (33 are in Pampanga and 8 in Tarlac) as well as World War II monuments and shrines.  The Death Mark Markers, silent white obelisks, created over a decade ago, stand as mute reminders of the path, from Mariveles and Bagac to the gates of the former Camp O’Donnell (now the Capas National Shrine), taken by nearly 75,000 soldiers, both Philippine and American, after the Fall of Bataan.

At the junction (where USAFFE soldiers, on the Death March, from Bagac and from Mariveles, merged on their way to Capas, Tarlac), near the Pilar Municipal Hall, is the Flaming Sword monument which depicts a hand holding a blazing sword up in the air.  In Balanga City are the Fall of Bataan Marker (Capitol Compound) and the Surrender Site Marker (back of the Balanga Elementary School, which was the command post of Japanese Gen. Masaharu Homma at the time of Bataan’s surrender).

Slightly off the beaten Visita Iglesia track in Pilar is the Dambana ng Kagitingan, a memorial on the western slopes of Mt. Samat that honors the gallantry of the Filipino and American soldiers who fought in Bataan. It is a steep drive up a 7-km long winding asphalt road from the Mt. Samat turn-off. The basement museum and viewing gallery atop the Memorial Cross may or may not be open, but you can still visit its altar, the esplanade, statues of war heroes, two bronze urns (symbolic of the Eternal Flame of Freedom) and 18 bronze insignias and flagpoles with colors of USAFFE division units, and the two huge panels on the north and south walls inscribed with accounts of the Battle of Bataan in relief.

Some of these churches were also battlefield sites.  The Church of St. Dominic of Guzman in Abucay was the site of a fierce battle between the Dutch and Pampango natives on June 23, 1647. In 1608, it also housed one of the earliest printing presses in the country. Here, Dominican Fr. Francisco Blancas de San Jose  and Don Tomas Pinpin printed several books in Spanish and Tagalog. In front of the church is a World War II Marker.  The Church of Our Lady of the Pillar in Pilar was burned by revolutionaries on May 28, 1898 (the image of Nuestra Señora del Pilar survived) while the Diocesan Shrine and Cathedral of St. Joseph in Balanga City was, during World War II, used by the Japanese 14th Army as an artillery emplacement to bombard Mt. Samat.

These seven Spanish-era churches, all built under the supervision of Dominican friars, have undergone various renovations, but they have one common material—batong silyar, sturdy bricks which are visible in their inner and outer walls.  All churches, except for that in Pilar, have installed historical markers.