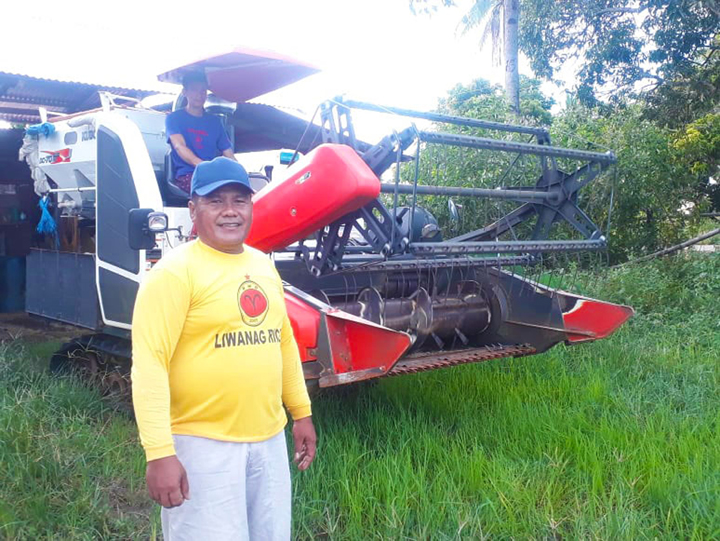 NARRA, Palawan—For the past 30 years, palay farmer Jessie Cabuhat has been tilling his own farm in Barangay Taritien, dreaming that one day, he will be able to set-up a small business of renting out farm machinery as an additional source of income for his family.

That dream became a reality in early 2020 through the assistance of the Land Bank of the Philippines (LandBank) under the Agricultural Competitiveness Enhancement Fund (ACEF) lending program.

Facilitated by the LandBank Palawan Lending Center, Cabuhat was able to loan P1.4 million under the ACEF to purchase a DC70 PH Plus combine harvester in time for the harvest of the wet season.

Cabuhat has since been renting out the combine harvester to other farmers in the area and has been earning from it for nearly a year now. He is also using the machinery for farming his family-owned 6 hectares of rice farmland, and another 8 hectares which he is renting from his parents. Now, the farmer turned entrepreneur has also generated employment by hiring 4 additional employees to beef up his regular roster of 6 farm helpers.

Cabuhat said he is grateful to LandBank for offering a loan opportunity at a very low interest rate of 2 percent per annum. For him, the equipment rental business has significantly complemented his regular income, supporting his family’s financial needs.

“Thank you to LandBank as I was able to fulfill my dream of owning a rice harvester. It is certainly a big help not only to my family but also to my fellow farmers,” Cabuhat said in Filipino.

The ACEF is a direct lending program administered by LandBank in partnership with the Department of Agriculture (DA), to provide timely and affordable credit to farmers and fishers, their cooperatives and associations, as well as micro and small enterprises (MSEs) to increase their productivity and income.

Individual farmers and fishers may use the loan to purchase farm inputs and equipment, or for farm improvements. For MSEs, cooperatives and associations, the loan may be used for the acquisition of machineries, equipment and facilities for agri-based production and post-production, as well as processing activities. As of April 30, LandBank said it has released under the ACEF lending program a total of P4.99 billion which benefited 39,502 farmers and fishers.