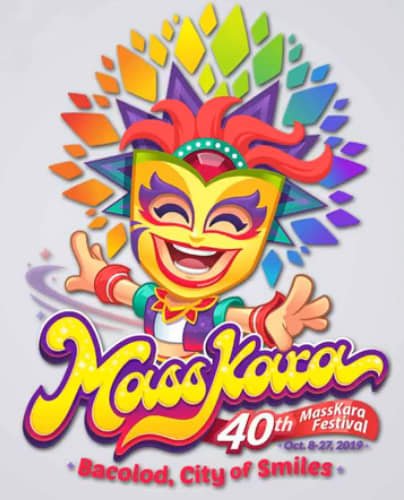 The logo of the 2019 MassKara Festival celebrating its ruby year is out.

The logo features Yuhom, the MassKara icon introduced three years ago, dressed up as a MassKara dancer, wearing a mask with 40 colorful feathers—symbolizing the 40 years of the festival and a crown with ruby gem and eight diamond studs for the eight decades of Bacolod City.

“Yuhom” is a Hiligaynon word that means smile.

It also features the red elements from the first logo as well as the text ‘MassKara’.

Yuhom is also jumping as an expression of excitement for the 40th celebration of the MassKara Festival.

Meanwhile, the countdown to the 2019 MassKara Festival has started.

A press conference was held at the Bacolod Government Center lobby today Sept. 8.