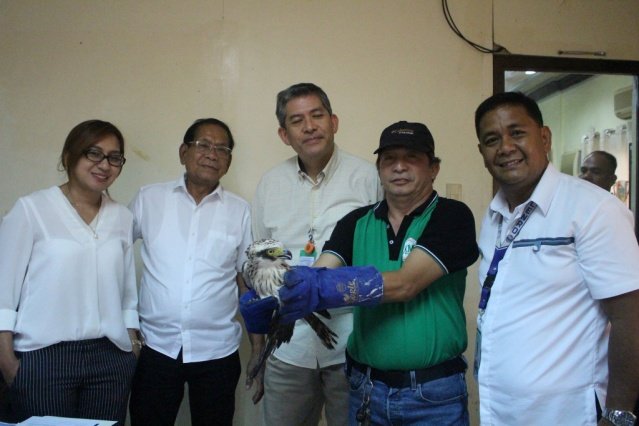 Charlemagne Fernandez, head of the Municipal Environment and Natural Resources Office (MENRO) said a certain Michael Bagayas and his family had rescued the serpent eagle after it fell in their residential area in Barangay San Jose in Sto. Tomas town, Davao del Norte.

Fernandez said the Bagayas family called their office to surrender the rescued crested serpent eagle would be properly endorsed to the municipal government of Sto. Tomas in an effort to protect and save the lives of the bird specie.

“The eagle was weak and it has an open wound on its right leg,” Fernandez said, noting that the bird is endemic to the Philippine forests. On Monday, Sto. Tomas Mayor Ernesto Evangelista has turned-over the rescued crescent serpent eagle to the management of J.K Mercado and Sons Agricultural Enterprises, Inc. Evangelista named the rescued male eagle as “Tomas” to honor the town where it was rescued.

“We decided to turn it over so that the eagle can live longer while being treated and cared in a facility.

This complements our efforts to protect and save this bird from poachers as well,” he said.

Alfonso Binan, Jr., liason officer of the J.K Mercado and Sons Agricultural Enterprises, Inc., received the rescued Philippine eagle that was placed in a bird cage. J.K Mercado and Sons Agricultural Enterprises, Inc. is recognized by the Department of Environment and Natural Resources (DENR) and Provincial Environment and Natural Resources (PENRO) to receive the bird specie pursuant to Republic Act 9147 or the Wildlife Resources Conservation and Protection Act.