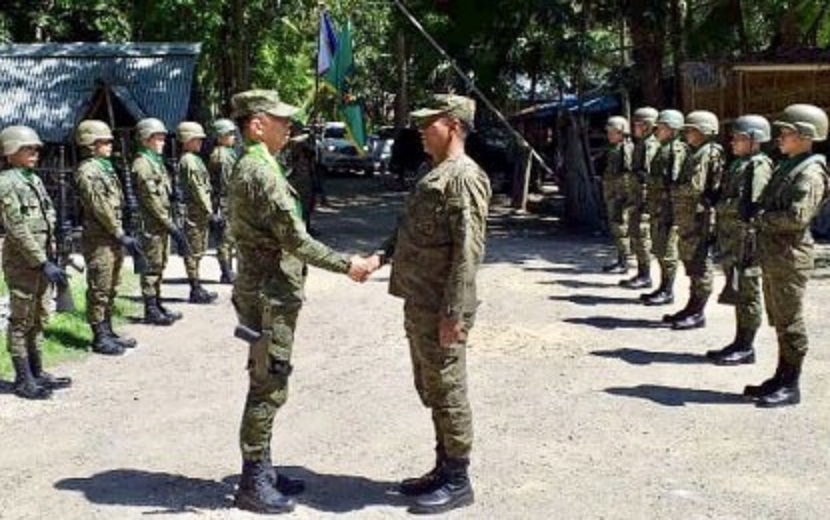 The head of an Army brigade based in Murcia, Negros Occidental, lauded the troops of the 94th Infantry Battalion for their significant contribution to the accomplishment of the 303rd Infantry Brigade’s mission in the anti-insurgency campaign even before their unit was placed under his watch earlier this month.

The 303rd Infantry Brigade formally received the 94IB to its jurisdiction during the visit of Brig. Gen. Benedict Arevalo to the unit’s headquarters in Guihulngan City, Negros Oriental.

“I want to thank the 94IB for its contribution to the success of the overall campaign of the Army in Negros,” Arevalo said.

“It is very important that 94IB accomplishes its tasks in Negros Oriental so that the other battalions can make Negros Occidental peaceful as well,” he added.

The 303IBde commander is no stranger to Guihulngan City as he was assigned in the area when he was still a captain.

During his arrival at the station in Barangay McKinley, he was met by the battalion officers led by Lt. Col. Randy Pagunuran.

“I am happy to finally meet and receive 94IB as the newest battalion of 303IBde in the fight against the terrorist Communist Party of the Philippines-New People’s Army-National Democratic Front (CPP-NPA-NDF),” Arevalo said.

The 94IB was activated on May 4, 2018 under the 3rd Infantry Division (ID) upon the orders of then Army commanding general, Lt. Gen. Rolando Joselito Bautista.

On July 1, the Army realigned its forces in Negros and adjusted the areas of operations of the 302IBde and 303IBde in the island, based on the directive of Maj. Gen. Dinoh Dolina, commander of the 3ID.

The area of coverage of the 303IBde now includes the northern and central parts of the island, including the first to fifth districts of Negros Occidental and the first district of Negros Oriental.

The 94IB, which was previously under the 302IBde, joined the 79IB based in Sagay City and the 62IB stationed in Isabela town under the 303IBde.

The 303IBde ceased control of the 15IB in Cauayan, Negros Occidental, which is now part of the 302IBde along with the 11IB, which has recently returned from Zamboanga City, and the 47IB based in Bohol.

The 302IBde led by Brig. Gen. Ignacio Madriaga, stationed in Tanjay City, Negros Oriental, has assumed responsibility over the southern part of the island, including the sixth district of Negros Occidental as well as the second and third districts of Negros Oriental. (Nanette Guadalquiver PNA via NDB)

Mother And Son Among 12 New Coronavirus Cases In NegOcc